Introduction Accidents on gasoline lines are often caused by tear-and-wear of pines (more than 1/3 oil-pipelines are 30 years old), by inner corrosion (intraproductive oil-gasoline) and outer corrosion (supply oil-pipelines). Often oil-pipelines are built with breach of pipeline laying depth. 42% of pipes serve on the intraproductive oil-pipelines less than 5 years because of inner corrosion. Half of oil-pipelines were built more than 30-50 years ago. Domestic pipelines significantly differ from foreign one in quality of their building, in pipe material properties and their insulated coating, and in other specific features. Organizations, which operate the oil-pipelines, need to carry out the examination and pipes repair. The flaw detection can be made in several non-destructive methods: ultrasonic, magnetic particle, penetrant and eddy-current. We consider the eddy-current method. Eddy-current method became one of the most important testing methods, which is used in production and pipe operation. It provides the defectoscopist current information about testing object conformance. Eddy-current flaw detectors are simple in installation and operation; they provide flaw detection results with high reliability. Today there is a big amount of eddy-current flaw detectors, but most of them are rather specific. Considering a big information array in testing of different items, the automated and multirobot systems of NDT are more widely used. SPC "Promprylad" has developed a universal eddy-current flaw detector "OKO", which allows to solve tasks of non-destructive testing in field of flaw detection, thickness measuring and structure testing. All the variety of functions in application field is performed programmatically and with a set of eddy-current transducers.

With the help of universal multichannel flaw detector OKO-01 it is possible to carry out a manual testing with single eddy-current transducer (both in single-frequency and in multifrequency) and manual mechanized testing with scanner use.

Several scanning devices were developed for OKO-01 for mechanized testing of pipelines.

Consists of eddy-current transducer of MDF type. Scanner is fit out with two powerful magnets, which hold it fest on the testing object (TO) and allow to keep one contour of scanning.This scanner is meant for confirmation testing of pipes and objects of cylindrical form with fillet transition made of ferromagnetic materials. 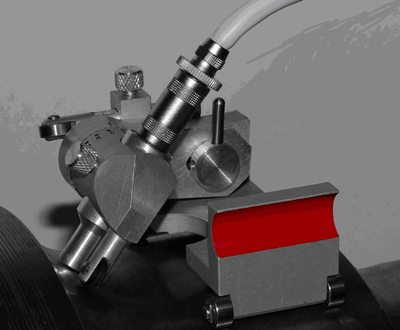 The scanner allows to change the step of scanning fixed, providing the overlap of neighbor scanning areas. Fixed change of scanning step allows to make a 100% testing of fillet transition and averts defect passing of any kind on the TO surface. The width of testing area is defined by diameter of working surface diameter of used ECT.

Consists of eddy-current transducers unit, track transducer and commutator. Eddy-current transducers unit has 8 differential eddy current transducers (A type) or ECT of MDF1201 (B type). Track probe is intended to calculate the track length, which was passed by the scanner. Thanks to commutator, scanner forms 8 eddy-current channels out of ECT signals. Scanner allows to test TO with fragments of about 80 mm wide that saves testing time. Scanner construction provides the adjustment of magnetic wheel position. It allows to test OT with diameter from 400 mm and more (up to plane). Thanks to magnetic wheels scanner holds steady on TO, which is made of ferromagnetic material with nonferromagnetic coating to 6 mm thick. 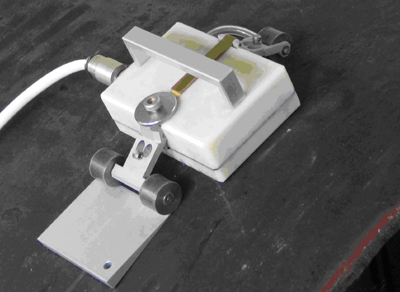 It is an instrument for testing of pipes of ferromagnetic and nonferromagnetic materials with diameter from 400 mm and alsotesting of plane surfaces. It is able to test in lines of 145 mm long. Sensitivity of the scanner is the same as in 8-channel scanner (B-type) 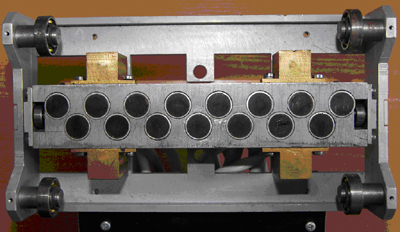 Experimental-industrial examination of universal multichannel eddy-current flaw detector "OKO-01" is suitable to pipelines testing, which was carried out on the zone of supply pipeline gas main "Perm-Kazan-Gorky-2" (341-354 km) of Mozhginsky LPUmg (. "Permtransgas"Co Ltd) involving specialists of West-Ural gas-thermal center. "Gasnadzor" Co Ltd and Close Corporation "Specktr KSK". Pipe inspection is carried out with eddy-current testing according to testing program of technical diagnostics (50% in volume from the total area). The quality of prepared surface was estimated as poor. It is connected with presence of adhesive base trace and fragments of old isolation. The additional surface preparation was not performed. A pipeline section was inspected during operation. This section was removed of service to repair it with total isolation method. A single "corrosion crack" defect with 50 mm-in length and 0,5 – 0,8 mm in depth was detected by the results of eddy-current flaw detection. The presence of detected defect was confirmed after pipe cleaning. The high eddy-current efficiency that was (at the average) 0, 5…0, 6 m? pipe surface per minute should be mentioned. 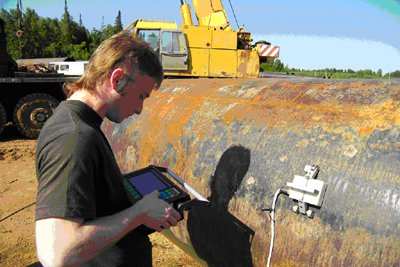 Testing of pipe without isolation, with the help of 8-channel manual scanner (B-type)